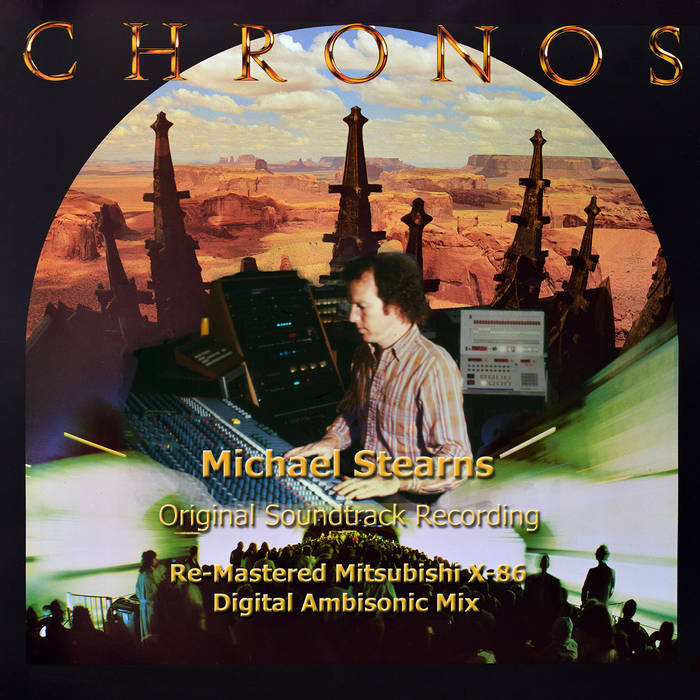 AndyShedd Great sound! I haven't a clue how to decode the Ambisonics mix but it sounds great through stereo speakers as well. I'm all about original mixes and it's nice that the artists have preserved this one.

Stephen Cox One of my favorite soundtracks. I watch Chronos and Baraka several times a year.

xmasallyear1963 Michael Stearns is a New Age genius. This album takes you deep into the heart of creation, particularly Corridors of Time and Essence of the Ancients. I wholeheartedly recommend his music, especially Planetary Unfolding, a seminal work in the New Age canon that still blows my mind more than three decades after its release, and Lyra, which best highlights the incredible serge modular synthesizer. Stearns will take you into the deepest reaches of the space between your ears.

Movements: 1 – Corridors of Time 2 – Essence and the Ancients 3 – Angels, Bells and Pastorale 4 – Escalator 5 – Voices 6 – Portraits 7 – The Ride (Finale) 8 – Credits/Theme
This is the re-mastered original CHRONOS film soundtrack stereo mix for LP and CD. It was mixed (in 1985) from the 2” 16 track analogue music build to a stereo Mitsubishi X-86 digital recorder. The mix was processed, encoded and monitored thru the AMBISONICS system for compatible surround playback (note: AMBISONICS hardware or software is needed for surround decoding). Standard stereo playback requires no specialized equipment.
“CHRONOS”, an IMAX (15 perf, 70MM) film by director/cinematographer Ron Fricke (Koyaanisquatsi, Baraka, Samsara), is a pan-dimensional tour through time and space with ports of call throughout the ancient and modern worlds. Ron designed and supervised the building of the camera used to shoot the time-lapse cinematography. Michael consulted with Ron on the music for each of the film’s movements, then traveled with the crew on the first shoot to Egypt and Italy to get a feeling for the different rhythms of time being captured in the camera. Before beginning the score, he installed a 6 channel surround sound system at his M’ocean studio in Santa Monica. This helped in the creation of a dynamic spatial design for the score while he composed and recorded the music. When the crew returned from filming, the picture was edited to the competed score.
CHRONOS, the film, is available for purchase on the web in DVD and BluRay formats, complete with high definition surround sound playback.