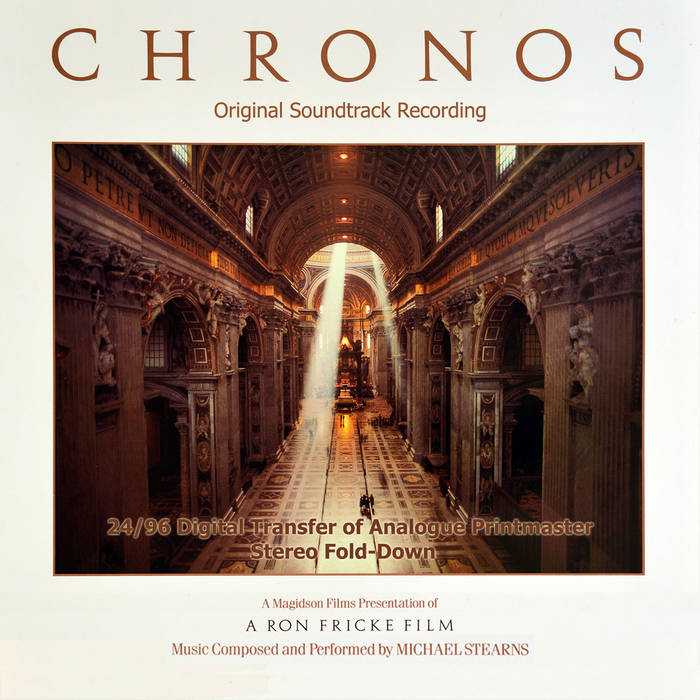 Movements: 1 – Corridors of Time 2 – Essence and the Ancients 3 – Angels, Bells and Pastorale 4 – Escalator 5 – Voices 6 – Portraits 7 – The Ride (Finale) 8 – Credits/Theme
This is the new stereo ‘fold-down’ from a 24/96 digital transfer of the original 6 channel surround analogue film print-master. For the original theatrical presentation, the 2” 16 track music build of the soundtrack was mixed to picture in 6 channel surround to a 1” 8 track master recorder at Michael’s M’ocean studio, then located in Santa Monica, California.
“CHRONOS”, an IMAX (15 perf, 70MM) film by director/cinematographer Ron Fricke (Koyaanisquatsi, Baraka, Samsara), is a pan-dimensional tour through time and space with ports of call throughout the ancient and modern worlds. Ron designed and supervised the building of the camera used to shoot the time-lapse cinematography. Michael consulted with Ron on the music for each of the film’s movements, then traveled with the crew on the first shoot to Egypt and Italy to get a feeling for the different rhythms of time being captured in the camera. Before beginning the score, he installed a 6 channel surround sound system at his M’ocean studio in Santa Monica. This helped in the creation of a dynamic spatial design for the score, while he composed and recorded the music. When the crew returned from filming, the picture was edited to the competed score.
CHRONOS, the film, is available for purchase on the web in DVD and BluRay formats, complete with high definition surround sound playback.